This powerful formula helps support increases in circulating testosterone while also blocking the body’s production of estrogen by using powerful, clinically studied key ingredients such as:

Test Revolution™ is clearly the Alpha of all testosterone boosters. When you really want help increasing your body’s natural testosterone levels, you want proven ingredients that boost test safely and effectively.

Tribulus is a herb that is mostly recommended for male health including virility and vitality, and specifically more catered towards cardiovascular and urogenital health.

Trigonella foenum-graecum, commonly known as fenugreek, is a popular herb in Arabic regions and India. It has traditionally been used to enhance libido and masculinity.

Divanil (aka 3,4-divanillyltetrahydrofuran, DVTHF) is an extract from the stinging nettle root (Urtica dioica). DVTHF exerts its effects by acting on testosterone transport proteins.

Maca is a plant in the broccoli family. Maca has traditionally been used as an aphrodisiac.

Zinc is vital for several important physiological roles in the body and is needed for many enzymatic reactions including those necessary to stimulate muscle protein synthesis.

B6 is a water soluble vitamin that is important to various metabolic reactions that occur in the body. It is also a coenzyme for protein metabolism and the nervous and immune system function.

Acacetin is a natural flavone that is found in the Damiana (Turnera diffusa) plant. Acacetin has been studied for a variety of reasons and some research suggests it may help support a healthy estrogen to testosterone balance.

Trans-resveratrol is a member of a group of plant compounds called polyphenols.

5,7-Dihydroxyflavone, also known as Chrysin, is a bioflavonoid found in high levels in propolis and in honey.

Quercetin is a type of plant-based chemical, or phytochemical, known as a flavonoid. It possesses anti-inflammatory and antioxidant properties.

White button mushroom can be used to drive down estrogen levels via inhibiting the aromatase enzyme.

DIM is a molecule that consists of two indole groups attached to a methine group. It is commonly found in broccoli and holds promise as an aromatase inhibitor.

Pygeum is an extract from the bark of the Prunus Africana tree and is used to alleviate benign prostatic hyperplasia (BPH).

Saw Palmetto is a fatty acid mix from Serenoa repens that may increase testosterone and suppress prostate growth. 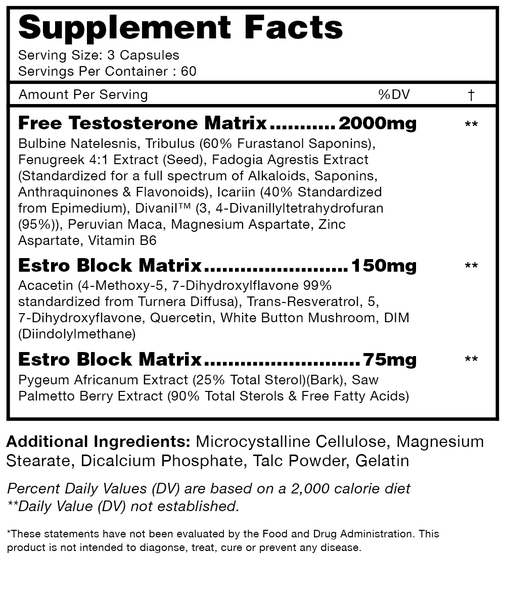