Purge Sports RIPTX  is engineered for perfection, providing 20 full-strength, fat-burning ingredients for maximum body fat loss. In order to create a shredded physique, multiple bodily processes must be activated, and RIPTX™ was built for ultimate ingredient synergy to increase caloric burn rate, release fat from body storages, drive that fat into the mitochondria to be burned, and prevent additional fat from being stored in its place. RIPTX™ is the total package. Get RIPPED with RIPTX™.

Reducing body fat is essential for showing off a physique built from endless hours of hard work. In fact, it’s essential for having any body worth showing off at all! But hard work doesn’t always equal out to hard body. Having a low enough fat percentage to make abs looked like they were chiseled from stone requires quite a bit more than extra cardio and diet control. This is exactly why fat burners are essential in the supplement routines of bodybuilders, fitness models, and physique athletes, and Purge Sports is raising the bar all the way to the top with RIPTX™!

Chromium
Chromium is an essential mineral with a role in insulin regulation and glucose management. It affects chromodulin, which improves its ability to enhance insulin receptor activity.

Iodine
Iodine is a mineral mostly found in seaweed and other saltwater plants. Due to great benefits to thyroid health, iodine is added to salt, though current dietary trends may still produce insufficient intake.

L-Carnitine (as Acetyl L-Carnitine and L-Carnitine Tartrate)
L-Carnitine is a dipeptide of lysine and methionine. It plays a critical role in energy regulation between cells and mitochondria.

Pterostilbene
An antioxidant that has evidence for reducing blood sugar and improving insulin efficacy. Protects the brain and other tissues from free radicals.

L-Tyrosine
L-Tyrosine helps to activate metabolic pathways that adrenaline – which are typically produced during acute stress and “fight or flight” scenarios.

TeaCrine® Theacrine
Theacrine is an alkaloid found in coffee in small quantities. Structurally similar to caffeine, it provides similar benefits but without the adrenaline rush and with greater euphoria.

Caffeine Anhydrous
Caffeine is the world’s most popular supplement. It is capable of many things, including increasing metabolic rate and thermogenesis, boosting fat oxidation, enhancing pain tolerance, and improving athletic performance.

L-Theanine
A main ingredient in tea and coffee, L-Theanine has structural similarities to neurotransmitters and is often used to compliment caffeine.

Infinergy™ Dicaffeine Malate
Infinergy™ provides all of the same great benefits as caffeine anhydrous. However, it’s specialized form with malic acid affords it the benefit of having no crash or jitters.

Rauwolscine
Rauwolscine is a yohimbine analogue, alpha yohimbine. Like yohimbine it is an adrenergic antagonist capable of improving fat loss, efficacy of other ingredients, and acting as an aphrodisiac.

GBB (Gamma-butyrobetaine ethyl ester chloride)
GBB is a natural precursor to L-Carnitine. L-Carnitine is required to transport fatty acids across the mitochondrial membrane so they may be burned off. L-Carnitine is also a capable performance enhancer and recovery aid.

Octopalean™ Octopamine
Octopamine is a metabolite of synephrine and a stimulant with fat-burning effects.

Q: What is the best way to use RIPTX™?

A: RIPTX™ is an extremely potent fat burner and thermogenic. If you are new to fat burners, begin with 1/2 serving (1/2 scoop, 2.25g) to assess tolerance. Afterwards, take 1 serving (1 scoop, 5.5g) first thing in the morning. For aggressive weight loss, take a second serving 4-6 hours after the morning dose. Do not exceed more than 2 servings per day. Do not take within 8 hours of bed time. For best results, use for 4 weeks with 2 weeks off before beginning another 4 week cycle.

Q: What other Purge Sports products should be used with RIPTX™?

A: For the best improvements in total body composition, use RIPTX™ with PREV2™ pre workout for the best training experience and BCAAX™ during workouts to prevent loss of muscle while in a cutting phase.

Q: What are some of the ingredients in RIPTX™ that create synergistic fat loss?

A: Many of the ingredients in RIPTX™ work together for a result greater than the sum of its parts. By addressing specific molecular mechanisms deep below the surface, RIPTX sets itself apart from other fat burners. For example, Rauwolscine improves the effects of caffeine to limit caffeine tolerance and keep it working for greater periods of time than caffeine alone. RIPTX™ collectively increases, not just calories burned but, calories burned from BODY fat, while most fat burners just make you tweak out! 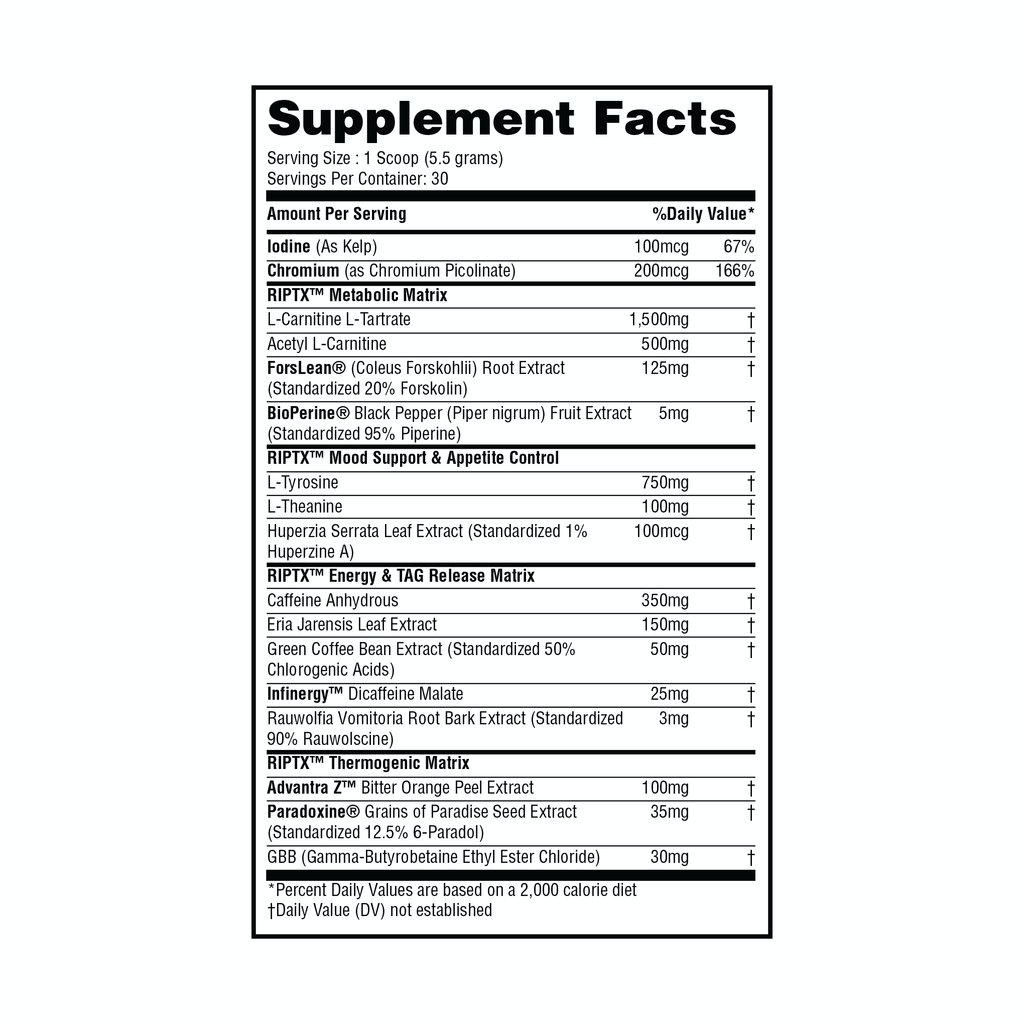