Fast and Free Shipping On All Over $49

What’s the primary ingredient for everything you’ve ever wanted? Change. Perfection is an evolution, and just like the original Rhino BLACK, Rhino BLACK V2 is here to turn your workout intensity up past 100.

With V2, the purpose of Rhino BLACK’s 3 complexes were maintained; they’re still the key to training session success – Pump, Cellular Energy, & Focus. Advancements in ingredient science have brought us to new heights.

Keep what works, and add what works better. Rhino BLACK V2 goes for the win, just like you.

Ornithine, when bound by salt at the molecular level to Orotate (orotic acid), is much more bio-available than in its HCL or free form.

Beta Vulgaris (beets) is extremely rich in nitrates and other ergogenic compounds. These components have been systematically proven to improve workout performance.

3-Aminopropanoic acid  is a precursor to carnosine that is better for improving muscle carnosine concentrations than carnosine supplementation itself. Carnosine acts as an intracellular buffer, neutralizing acids and bases.

This brings potential benefits for endurance and stamina events, including adaptation to environmental heat/humidity stress, along with promoting blood flow associated with resistance training.

By combining magnesium to the creatine mixture in this compound – it allows (in a similar fashion to COP) the creatine to be absorbed and utilized for anabolic processes and prevents conversion to creatinine through the process of cyclization.

This blend of caffeine helps to provide effectively dosed stimulation for your training and not keep you up all night long.

Choline is an essential nutrient for brain health and synaptic plasticity. 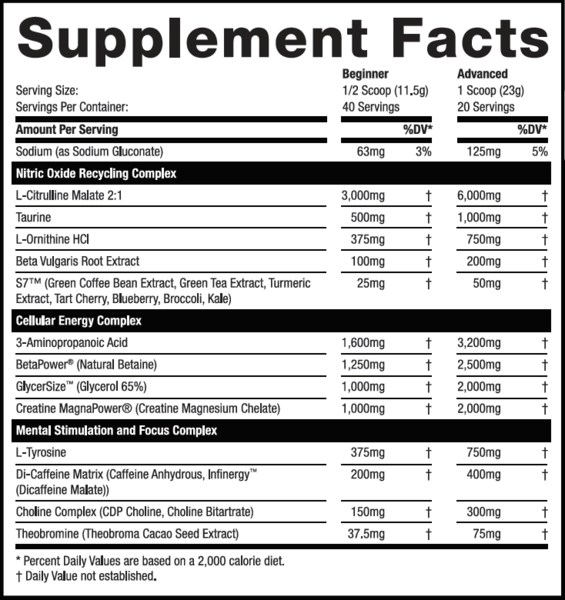