What’s more, because Kre4Max™ is highly soluble and absorbed rapidly by the body no loading phase is required and you won’t experience the bloating or cramping often associated with taking straight creatine monohydrate.

To top off this revolutionary ergogenic formula, we added a unique absorption matrix to increase the bioavailability of the other active ingredients found in Kre4Max™ and Hydromax™ to enhance plasma and intramuscular volume expansion leading to massive pumps.

No other creatine formula comes close to matching the quality and efficacy of the ingredients in Kre4Max™.

As they say, “the proof is in the pudding.” Take a close look at the Kre4Max™ label and you will be hard-pressed not to make it your go-to creatine complex.

At MuscleSport, innovation is the name of the game, and we do it better than anyone. This innovation can easily be seen in the countless hours that were spent on the research and development of Kre4Max™.

With the top 3 forms of pharmaceutical-grade, clinically-dosed creatine, Hydromax™, and a potent Bio-Absorption Matrix, Kre4Max™ is built for one purpose – to help you achieve unreal gains in strength and size.

Creatine is a tripeptide (3 amino acids), a protein-derived compound produced in the body that serves as the primary fuel source (ATP) for a short duration, high-intensity activities such as sprinting and weightlifting.

Creatine is stored primarily in muscle tissue, and it is used for rephosphorylating ADP into ATP. This means that when our muscles use up our energy stores, creatine helps to replenish those stores in an instantaneous manner.

Approximately 2 grams of creatine are found in individuals that do not supplement and maintain a diet including animal-based proteins.  Those who do supplement can increase their body’s internal creatine pool by 10 to 40% depending on diet and total lean muscle mass.

As a whole, creatine is arguably the most extensively researched and effective supplement available today.  Over 500 studies exist of the ergogenic benefits of creatine supplementation with over 70% of these studies producing significant improvements in performance without any detrimental side effects.

Natural sources of creatine include meat, eggs, fish, and milk but you would have to consume ~20 steaks/day in order to fully saturate creatine stores; while 5 grams a day of creatine monohydrate or other forms of creatine for 20 days will accomplish the same goal.

Kre-Alkalyn is “buffered creatine” that does not convert into creatinine prior to reaching skeletal muscle tissue and is believed to have the benefits of regular creatine, without the associated side-effects of creatine monohydrate use.

Creatine Magnapower is simply creatine bonded to magnesium. This is thought to increase the solubility and absorption of the creatine. Potential Benefits:

Hydromax™ is a uniquely optimized, highly concentrated powdered blend of glycerol and silica that offers all the benefits of glycerol without the drawbacks.

Trigonella foenum-graecum, commonly known as fenugreek, is a popular herb in Arabic regions and India. It has traditionally been used to enhance libido and masculinity.

Alpha-Lipoic Acid (ALA) is a mitochondrial fatty acid that is highly involved in energy metabolism. It is synthesized in the body and can be consumed through eating meats and minimally in some fruits/vegetables.

Piperine is an extract of the fruit of black pepper or long pepper. 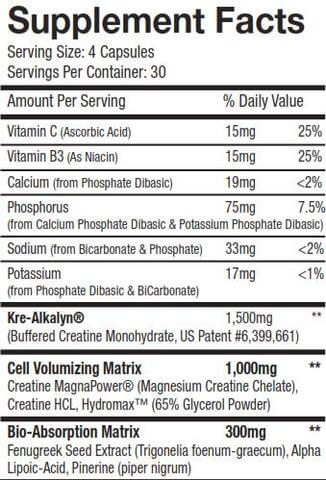