You work hard in the gym, and you work hard on your diet. What if I told you that your hard work was going to waste because the nutrients that you are consuming are not getting to where they need to be?

When you are trying to pack on mass, you have to eat more, but how do you tell your body to send all those nutrients to the muscle instead of to fat tissue? With GLYCOSLINTM, the most powerful insulin driver and nutrient delivery enhancer on the market.

Nutrient partitioning is the concept that the body can be activated to deliver nutrients, such as carbohydrates and protein, to desired tissues (muscles) and not to the tissues we don’t want (adipose tissue or fat). This can be accomplished by activating insulin, the hormone that activates transporters of carbohydrate and protein, receptors on muscle cells but not on fat cells.

Compounds such as cyanidin-3-glucoside, banaba extract, and berberine have demonstrated nutrient partitioning in studies, where muscle cells pull in the nutrients from high-calorie diets while fat cells remain unaltered, or even shrink!

GlycoSlin can also be used to mitigate the damage from cheat meals.

What sets this formula apart from the competition is its precise combination of insulin mimetics and sensitivity activators, so that insulin has helpers to do the work AND can do its job better with more results!

So get those calories in, and then put them to work with GLYCOSLINTM!

Chromium is a trace mineral that needs to be consumed in small amounts for optimal functioning. One of its purposes is to modulate blood glucose by activating insulin action.

Gentian root (Gentiana lutea) is a strongly bitter compound that has been used in traditional folk medicine for improving digestion.

Berberine is a powerful activator of glucose repartitioning and is as effective as many pharmaceuticals that are used for diabetics.

Also known as alpha-lipoic acid, thioctic acid can benefit by both increasing blood flow and nutrient repartitioning. As blood flow increases and more nutrients are delivered, thioctic acid will also keep the body in an anabolic state by downregulating AMP kinase, a “starvation” enzyme.

A powerful addition to this formula, cinnamon can benefit nutrient delivery in many ways. Cinnamon can improve the effectiveness of endogenous insulin, while also acting as an insulin mimetic to supercharge the carbohydrate delivery to muscles.

Amylase is the enzyme that breaks down larger carbohydrates, such as starches, into smaller units during digestion for absorption into the body. This amylase, derived from a Japanese fungus used to ferment foods, ensures that carbohydrates in the diet will be fully absorbed for optimal carbohydrate uptake into the musculature.

C3G is a bioactive substance from dark berries that exerts profound nutrient partitioning effects. C3G has been shown to increase carbohydrate uptake and to enhance insulin sensitivity through multiple mechanisms.

Banaba extract is another exciting botanical that has powerful nutrient repartitioning abilities, such that carbohydrate uptake is vastly improved while fat cells shrink simultaneously.

Vanadyl sulfate is a source of vanadium, an ultra-trace mineral that is essential, but in very small amounts.

Bioperine is a patented black pepper extract. Traditionally used for gastrointestinal disorders, it can benefit insulin action by both increasing intestinal absorption of carbohydrate and improving the bioavailability of insulin activators, such as berberine and cinnamon.

Q: How do I take Kodiak Glycoslin?

A: Take one serving (3 capsules) once daily just prior to your highest carbohydrate meal of the day. Due to the formula’s strength and effectiveness, it is recommended that the accompanying meal has at least 50g of carbs in it.

A: They can. Carbs are a source of energy used for high-intensity activity, such as weightlifting, so they are necessary in some cases. GlycoSlin helps prevent fat gain from carbohydrates by directing them to be used rather than stored. This can help improve performance and muscle building while also reducing potential negative impacts of carbs on body fat.

Q: What other Kodiak products can I stack with Glycoslin?

A: Our Attack pre workout will help to supercharge your workout and our 3Whey protein for post workout recovery.

Q: When is the best time to take Kodiak GlycoSlin?

A: The best time is before your high carb meal, so usually either lunch or dinner, depending on your diet. If it is a cheat meal (or cheat day), use GlycoSlin whenever you have an unusually high quantity of carbohydrate in a single meal. GlycoSlin is safe to use with every meal.

1. Mang, B., et al., Effects of a cinnamon extract on plasma glucose, HbA1c, and serum lipids in diabetes mellitus type 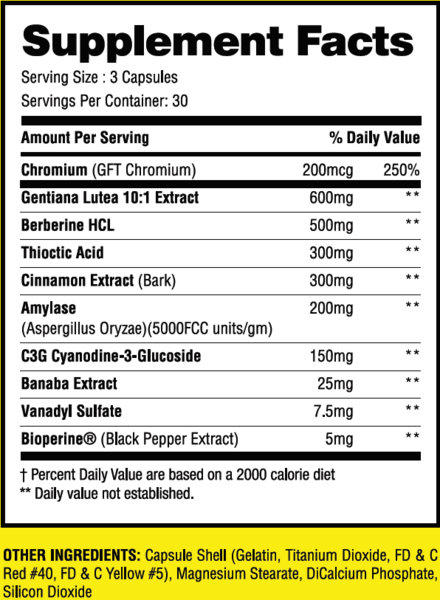