This product is designed to enhance fat loss when used in conjunction with a proper diet and training program, like Shortcut to Shred. The ingredients and amounts I used in the Shred JYM™ formula are based on my long-standing recommendations. They have been shown in the lab and in the gym to truly promote fat loss. This is what I turn to when I’m looking to get shredded before a photo shoot. What will you do with it?*
– Jim Stoppani, Ph

Three-Stage Fat Loss
Shred JYM attacks body fat from three different angles that all work together to provide you with the most effective strategy for cutting body fat. The ingredients in Shred JYM work in synergy with one another to create a 3-stage fat burning system. The ingredients I selected for Shred JYM work to increase the release of fat from the fat cells, help to carry more of that fat into the mitochondria and increase your metabolic rate to burn up more of that fat.

Getting the fat to leave your fat cells may be the first step to getting leaner, but it’s only 1/3 of the equation. Just because more fat leave your fat cells does not necessarily mean that you will get leaner in the long term. That fat can easily get stored back into your fat cells if it is not used for fuel. The first step to getting that fat burned up for good is getting it into the mitochondria of the body’s cells. The mitochondria are basically the main energy plants of cells. It’s the mitochondria that basically take fat, carbs and even protein (at least their breakdown products) and convert them into usable energy in the form of ATP (adenosine triphosphate). It’s ATP that your muscles use to contract during exercise.

The third step to making sure that all that freed-up fat is burned away for good in the mitochondria is to crank up the body’s energy requirements. The simplest way to do this is to exercise. Exercise burns up more calories. That means that your mitochondria are burning up more carbs, fat and protein to make more ATP. Exercise also helps to burn more calories at rest, at least for several hours after the workout is over. But at other times of day, your metabolic rate will be much lower. This is especially true the longer you diet and the lower your calorie intake gets. The EGCG from the green tea extract, capsaicin from the Capsimax® Cayenne pepper extract, synephrine from Advantra Z®, caffeine and L-tyrosine all work to ramp up the activity of the mitochondria so that more of that freed up fat is converted into ATP. It’s this three-step process that leads to long-term fat loss.

>> 1.5 grams (1,500 milligrams) of acetyl-L-carnitine to help carry more fat into the mitochondria where it is burned away for good.

>> 500 milligrams of green-tea extract to increase metabolic rate and burn up more calories and more fat.

>> 200 milligrams of caffeine to release more fat from your body’s fat cells so that it can be burned away as fuel.

>> 500 milligrams of L-tyrosine to help enhance your mood and alertness.

As you can see from this table, the leading fat-burner formulas either don’t include most of the most critical ingredients to aid fat loss at all, or have them as “proprietary blends,” which really means that they’re actually under-dosed. Nothing on the market even comes close to stacking up to Shred JYM.

Let’s get out the microscope and take closer look at each of the six ingredients and the doses used to make Shred JYM a safe and effective fat burner.

*20 mg of Synephrine from Advantra Z®

Stephens, F. B., et al. New insights concerning the role of carnitine in the regulation of fuel metabolism in skeletal muscle. The Journal of Physiology 581: 431-444, 2007.

Dulloo, A G., et al. Efficacy of a green tea extract rich in catechin-polyphenols and caffeine in increasing 24-h energy expenditure and fat oxidation in humans. Am J Clin Nutr 70: 1040–1045, 1999.

Chantre, P. and Lairon, D. Recent findings of green tea extract AR25 (Exolise) and its activity for the treatment of obesity. Phytomedicine 9: 3–8, 2002.

Astrup, A., et al. Caffeine: a double-blind, placebo-controlled study of its thermogenic, metabolic, and cardiovascular effects in healthy volunteers. Am J Clin Nutr 51: 759–767, 1990.

Hollands, M. A., et al. A simple apparatus for comparative measurements of energy expenditure in human subjects: the thermic effect of caffeine. Am J Clin Nutr 34: 2291–2294, 1981.

Duncan, M. J. and Hankey, J. The effect of a caffeinated energy drink on various psychological measures during submaximal cycling. Physiol Behav. 2013 May 27;116-117:60-5.

Owasoyo, J. O., et al. Tyrosine and its potential use as a countermeasure to performance decrement in military sustained operations. Aviat Space Environ Med. 1992 May;63(5):364-9.

Stohs, S. J., et al. A review of the receptor-binding properties of p-synephrine as related to its pharmacological effects. Oxidative Medicine and Cellular Longevity, 2001. 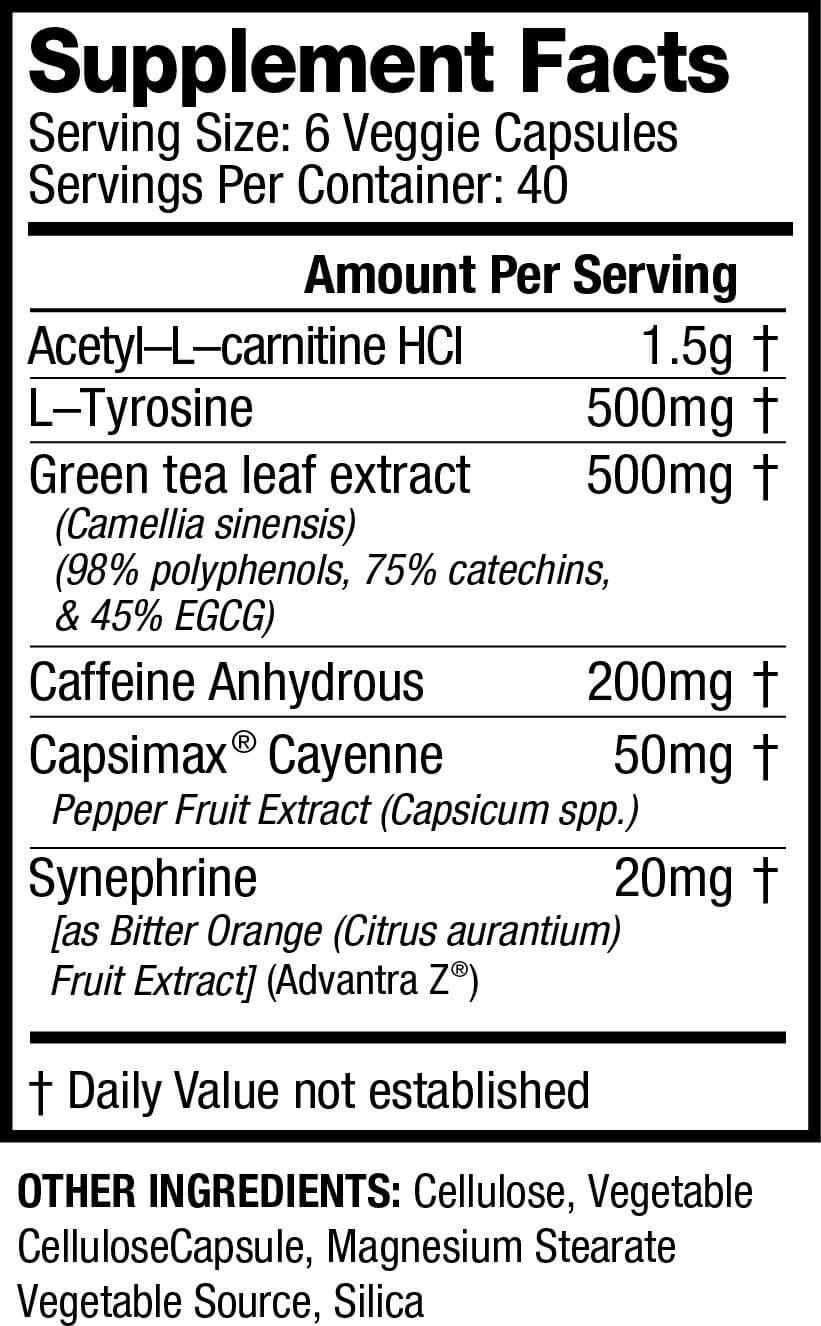