3-Aminopropanoic acid is a precursor to carnosine that is better for improving muscle carnosine concentrations than carnosine supplementation itself. Carnosine acts as an intracellular buffer, neutralizing acids and bases.

Mucuna is rich in L-DOPA. Higher levels of L-DOPA improve mood and motivation.

Rhodiola is a traditional herbal supplement used to treat fatigue and improve adaptations.

Kanna is a psychoactive herb without hallucinogenic or habit-forming properties. It is traditionally used prior to stressful events to curb anxiety and improve performance. 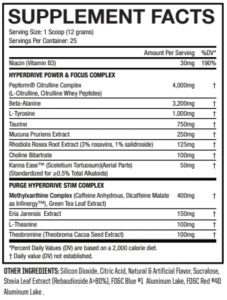