Are you holding that bit of subcutaneous water that you just can’t get rid of? Are you getting ready for a photoshoot? A competition? Or just don’t want to have that bloated look going to the beach or a wedding?

If so, H2O Revolution™ is right up your alley. Many water reduction pills on the market deplete water from ALL compartments of the body. This means it will come out of your muscle as well as fat and skin subcutaneously.

This will allow you to keep your curves and muscular fullness while being able to see it better without the bloat blurring your lines! A look at a few key ingredients in H2O Revolution™ will show you why.

Bar none H2O Revolution™ is the #1 water depletion tool on the market.

Using a matrix that combines the industries top herbal diuretics, H2O Revolution™ will help remove subcutaneous water from in between your muscles to help you achieve that ripped, dry, and toned look.

Celery seed oil is a supplement containing a high amount of volatile compounds known as phthalides. These compounds, as well as the major component Sedanolide, appear to have general antioxidative properties and have traditionally been used as a diuretic.

Taraxacum officinale, also known as dandelion, is a vegetable that has a diuretic (water loss) effect when ingested.

Uva-Ursi is an herbal compound which has the effects of a mild diuretic and astringent (anti-inflammatory).

Caffeine Anhydrous is simply caffeine with no water (around .05%). This has been shown to make caffeine anhydrous more potent because the body will absorb it more readily.

Yerba matte is a south American plant that offers the stimulative effects of coffee with the health benefits of tea. It contains caffeine, theobromine, theophylline, and numerous antioxidants.

Throughout history asparagus’s most widespread health application has been for the support of fluid balance and cleansing.

Watermelon extract is high in vitamin C and citrulline.  It is often used to improve hydration levels and replenish depleted electrolytes.

Ginger is a spice that can reduce nausea and ease digestion quite effectively.

Buchu is harvested from the dried leaves obtained from three species of Barosma.

Taurine has a myriad of benefits. From helping the body to metabolize fat, improving insulin sensitivity, raising testosterone levels, as an antioxidant, higher performance and quicker recovery during athletic training and increasing cardiovascular health… it goes without saying that Taurine is a great ingredient to have in your wheelhouse

Astragalus is considered an adaptogenic herb that helps protect the body against various stresses, including mental, emotional, and physical stress.

Chromium is a mineral our bodies use in small amounts for normal body functions, such as digesting food.

Potassium is a mineral found in varying amounts in almost all foods.

Calcium is an electrolyte that is necessary for many functions, especially muscle contraction. 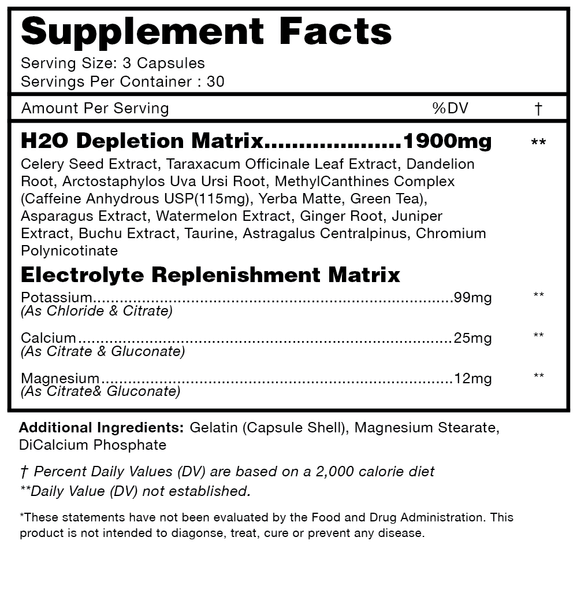