Core BCAA + NRG™ packs a powerful one-two punch by combining the proven muscle building and recovery benefits of BCAAs with an intra cellular energy complex containing 6 potent, performance enhancing compounds. These ingredients work in perfect synergy to help maximize the results from rigorous training sessions by amplifying energy, reducing muscle breakdown, accelerating recovery and supporting an increase in lean body mass. Core BCAA + NRG™ also makes an ideal beverage throughout the day when you need to refuel with critical aminos and clean energy to help you get through the daily grind. With Core BCAA + NRG™ you will be able to train harder for longer, recover faster and unleash your performance potential.

The essential amino acids Leucine, Isoleucine, and Valine collectively form what is referred to as the Branched Chain Amino Acids (BCAAs). These amino acids are essential because they cannot be produced in the body and must be provided though supplementation or diet. BCAAs comprise approximately 30% of the total muscle protein pool and are the primary amino acids oxidized in the muscle during exercise and catabolic stress. For these reasons athletes supplement with BCAAs for the purpose of increasing muscle mass, reducing muscle damage, blunting fatigue, and increasing energy during exercise.

• Hundreds of studies exist on the ergogenic benefits of BCAAs. The majority of them show that BCAAs, whether consumed pre, during, or post-exercise; decrease protein catabolism (breakdown) and support muscle protein synthesis…a physiological process responsible for muscle growth and repair. Furthermore, BCAAs are vitally important to glucose (energy) production; contributing to greater than 40% of glucose production during sustained endurance exercise.
• A study done in 2009 found that subjects who supplemented with BCAAs while following an 8-week resistance training program had a greater decrease in body fat, an increase in lean mass, and greater strength gains on the bench press and squat compared to the non-BCAA group.

Leucine is one of the essential branched chain amino acids (BCAA). By itself it can stimulate muscle protein synthesis; the process responsible for muscle growth and recovery. This is why it is often referred to as the “main” amino acid.

Isoleucine, like leucine, is another BCAA that can stimulate muscle protein synthesis, but to a lesser when not combined with the other BCAAs. However, Isoleucine significantly increases glucose uptake and the usage of glucose during exercise; leading to greater energy production.

• Isoleucine may also play in role in the fat burning abilities of BCAAs.
• Nishimura et al. (2010) found that mice consuming a high fat diet in conjunction with isoleucine gained less fat mass than mice not receiving isoleucine. This was due to isoleucine’s ability to stimulate receptors (PPAR) that inhibit fat storage and increase fat burning.

• When exercising tryptophan is converted to serotonin and signals the brain that the body is fatigued…ultimately leading to a decrease in muscle strength and endurance
• Since Valine competes with tryptophan for entry into the brain, and prevails, less serotonin gets to the brain; ultimately leading to stronger muscular contractions, quicker recovery between sets, and prolonged muscular strength and endurance.

Beta Alanine is an amino acid that is used to enhance muscular endurance. Reports of increased rep range are common. Also, the benefit is highly noticeable in moderate to high intensity cardio.

• Beta-Alanine’s effectiveness comes through boosting the synthesis of carnosine. Carnosine acts as an intra muscular buffer to keep the pH from dipping too low during a workout. To keep muscular strength through a workout, you need to have your pH levels optimal. If they drop too low, you have significantly less strength and fatigue quicker.
• Beta-Alinine synthesizes to carnosine which helps keep your pH levels in check by absorbing positive hydrogen molecules (H+) that are produced during periods of heavy exercise. By absorbing the H+ produced by strenuous exercise, your muscular pH levels are kept at an optimal level which will allow you to train harder and longer!
• A recent meta-analysis confirmed the ergogenic effect of beta-alanine, showing a 2.85% increase in exercise performance compared to placebo when dosed at ~2/grams daily.

Citrulline is a non-essential amino acid that eventually converts to nitric oxide. Nitric oxide is a vasodilator that can help to lower blood pressure and improve blood flow to both organs and muscles.

• Studies have shown that Citrulline enhances exercise tolerance by reducing levels of blood ammonia and lactate that are typically elevated during strenuous exercise.
• This ingredient will allow you to train with less rest in between sets and elevate your endurance capacity.
• A recent research study found individuals who consumed citrulline for 15 days were able to increase ATP production during exercise by 34% and improve phospho-creatine resynthesis after exercise by 20%.

Glycerol (1,2,3-propanetriol) is a colorless, odorless, sweet tasting sugar alcohol. When consumed glycerol is rapidly absorbed primarily in the small intestine, distributed equally among all fluid compartments, and promotes hyperhydration by inducing an osmotic gradient.

Caffeine Anhydrous is simply caffeine with no water (around .05%). This has been shown to make caffeine anhydrous more potent because the body will absorb it more readily.

• Although caffeine can affect a wide variety of motor and mental functions it is most commonly used to improve endurance exercise, focus and cognitive performance, and improve energy levels.
• Caffeine has also been shown to have a thermogenic effect (heating/calorie burning) at rest and may increase the use of fats for fuel during exercise.
• According to the research higher doses of caffeine, in the 250-450mg range, are needed to provide an ergogenic benefit.
• In a study conducted by Astorino et al. (2010), active men given caffeine before resistance training were able to increase maximal torque, power, and volume by 5-8%.

Astragalus is considered an adaptogenic herb that helps protect the body against various stresses, including mental, emotional, and physical stress.

• Astragalus also demonstrates the capability, via adipocytes (fat cells), to improve glucose metabolism and diabetic symptoms through a variety of mechanisms.
• Astragalus can enhance exercise endurance and performance. Studies using the herb found that supplementation reduced exercise-induced accumulation of the byproducts blood lactate and ammonia. This resulted in less fatigue and translates into improved exercise performance.

Potassium is a mineral found in varying amounts in almost all foods.

• It is needed for building and keeping strong bones.
• It also helps control the amount of calcium in the body and urine.
• If potassium levels get too high or too low, the heart and nervous system completely shut down. Many people in the U.S. often fail to obtain optimal amounts of this nutrient, and pay a health cost for it.

Calcium is an electrolyte that is necessary for many functions, especially muscle contraction.

• Therefore, the level of calcium in the blood has to be kept in a narrow range at all times.
• If the blood calcium level drops, then the bones will release calcium until an optimal level is once again achieved. However, this compromises the strength of the bones.
• Importantly, calcium is lost in sweat, so prolonged exercise requires calcium replenishment.

• Magnesium deficiencies are the second most common deficiency in developed countries. A lack of magnesium will raise blood pressure and reduce insulin sensitivity.
• Increases in free and total testosterone have been noted in sedentary and athletic populations when supplementing with magnesium supplementation. It also acts as a muscle relaxer and may improve aerobic performance.
• Brilla et al. (1992) discovered 26 untrained subjects who participated in a 7 week strength training program in conjunction with magnesium supplementation were able to increase testosterone relative to baseline.

Q: What is the best way to take Core BCAA + NRG?
A: As a dietary supplement take one serving 1 to 2 times daily.

Q: When is the best time to take Core BCAA + NRG?
A: Immediately pre workout (if not taking a traditional pre-workout supplement) as well as in between meals in order to maximally stimulate muscle protein synthesis throughout the day (promotes muscle recovery and repair). Because BCAA + NRG contains 200mg of caffeine it is not recommended to take 6 hours before bed time.

Q: What are BCAAs?
A: The branched chain amino acids are collectively made up of leucine, isoleucine, and valine. They are essential amino acids that cannot be produced by the body and can only be obtained through diet or supplementation. The BCAAs are the primary drivers behind muscle protein synthesis; arguably the most important physiological process for maximal muscle growth and recovery.

Q: I see a full serving of Core BCAA + NRG has 200mg of caffeine. Is that amount safe?
A: Generally speaking, yes. A large review by the European Food Safety Authority concluded that a daily dose of 400mg is safe for adults. We suggest not taking any other stimulants (like coffee) on the days you take Core BCAA + NRG. We also recommend starting with a half scoop to assess your tolerance before moving on to a full scoop. 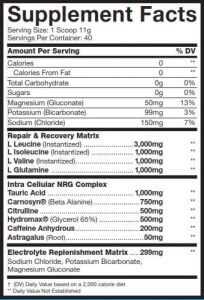