B6 is a water soluble vitamin that is important to various metabolic reactions that occur in the body. It is also a coenzyme for protein metabolism and nervous and immune system function. Furthermore, it is involved in the synthesis of hormones and red blood cells.

B6 helps to protect the heart from cholesterol deposits and helps to prevent kidney stone formation.
B6 also helps activate coenzymes that are important in metabolism.

L-Carnitine is an amino acid that is derived from lysine and methionine and is essential for transporting long-chain fatty acids from the cytosol into the mitochondria for subsequent fat breakdown and energy production.

L-Carnitine has also been shown to reduce exercise-induced muscle damage, muscular fatigue, and reduce soreness.
A study conducted by Volek et al. (2002) found that supplementation with L-Carnitine daily for one week in healthy resistance trained men was able to reduce markers of muscle damage after weight lifting. It was also discovered that biomarkers of oxidative damage reduced to baseline sooner than placebo.
Ho et al. (2010) discovered that middle aged males and females who supplemented with L-Carnitine over a 24-day period experienced less muscle damage and soreness following exercise and had less oxidative markers in serum after exercise.

Fumarate, or fumaric acid, is an important compound, which is also naturally present in the body.

As a component of the Krebs cycle (Citric Acid Cycle), fumaric acid plays a key role in generating energy.
Combined, l-carnitine and fumarate provide dual support for energizing the heart and skeletal muscles.

Aframomum melegueta is a spice with a similar composition as Ginger.

It shows some promise in fat-mass control.
It has been shown to have an impact on increasing metabolic rate.
A study by Suqita et al. (2013) found that men who supplemented with aframomum melegueta for four weeks were able to activate brown adipose tissue and increase whole-body energy expenditure.

Gamma-butyrobetaine ethyl ester chloride is a precursor for L-Carnitine.

GBB-EEC has the ability to increase the body’s production of L-Carnitine and can help improve energy levels and athletic performance.
Higher L-Carnitine levels also helps to promote fat loss and immune system support.

CapsiAtra™ has the ability to increase resting energy expenditure (REE) – allowing the body to burn off more calories than normal, and stimulate thermogenesis – allowing the body to burn calories off of stored fats.
It also enhances glycogen sparing, promoting an increase in energy production through the burning off of fat stored within the body instead of carbohydrates.
Galgani et al. (2010) discovered subjects who supplemented with Dihydrocapsiate over a one-month period were able to increase their resting metabolic rate on a daily basis compared to placebo. 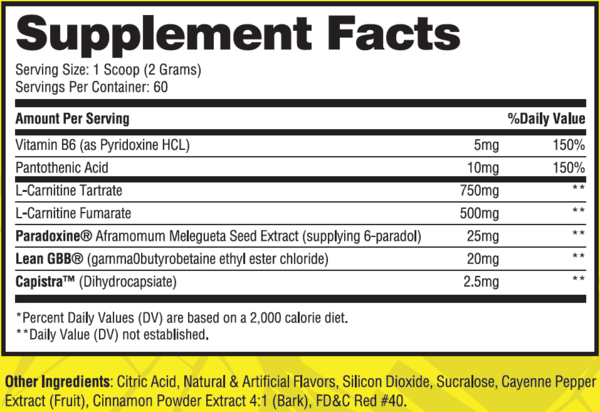