May enhance the overall mood

The health of your adrenal glands is absolutely vital to your well-being and overall performance. The adrenal glands play a huge role in producing the hormones we need, particularly during times of stress.

Rigorous training and cardiovascular activity tends to strain the adrenal glands and may prevent them from functioning optimally. Add in the effects of dieting, dehydration, lack of sleep, or any stimulant found in a pre-workout and adrenal function may be drastically impaired, bringing your weight loss to a standstill and shooting your cortisol levels through the roof.

We accomplished this by using the following key ingredients:

The effects of adrenal fatigue can be disastrous if ignored. High levels of fatigue, a weakened immune system, and suppressed hormone production can put a serious damper on your fitness goals.

Adrenal Revolution will help reset your adrenal system and have you performing at your best.

Ashwagandha is classified as an adaptogen, meaning it helps the body deal with physical, emotional, and psychological stressors.

Rhodiola Rosea root extract has a wide range of adaptogenic functions, which means it may help you deal with stress and manage its effect on your body.

Holy Basil is an ayurvetic herb which has historically been used to treat a variety of general ailments.

Tyrosine’s primary role in the body is as the direct precursor to thyroxine and to the neurotransmitters dopamine, epinephrine, and norepinephrine. 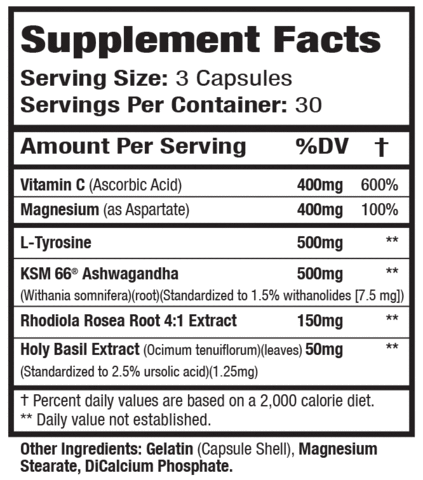