Gold Standard PRE Advanced Pre Workout from Optimum Nutrition is the NEXT level of proven ingredients. Optimum Nutrition has taken all the best parts of the Original Optimum Gold Standard Pre Workout and dialled up the intensity with a NEW formulation designed to help you unleash a new level of intensity, energy, focus and combined with a Powerful Pump.

Whether you want to push yourself harder for longer or smash your next set, Gold Standard PRE Advanced will help you get there for sure. 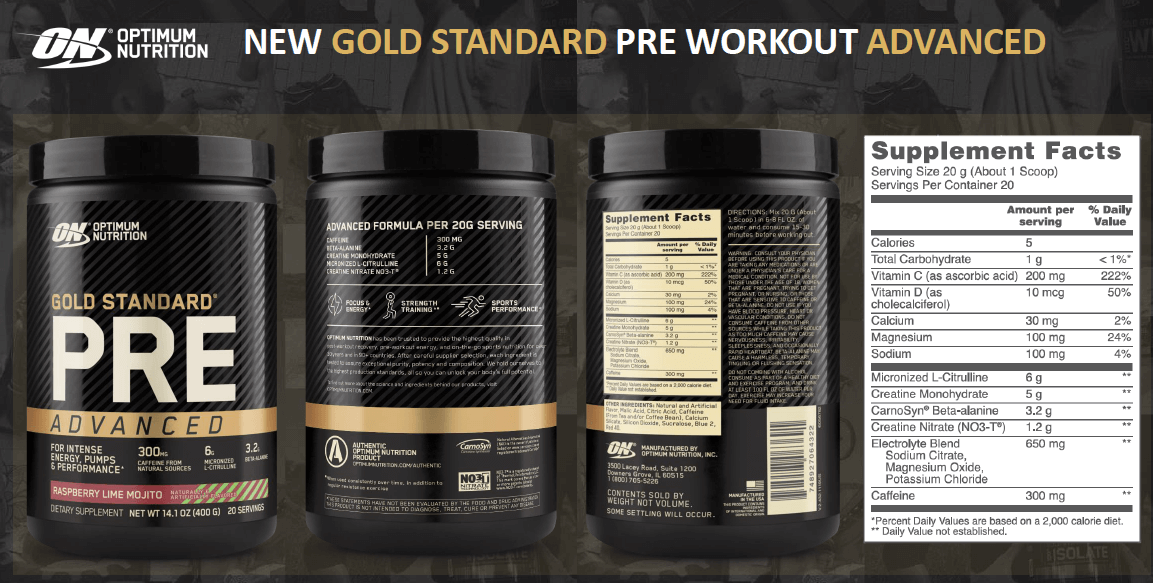 The role of caffeine in enhancing performance is well documented as it lowers our perception of fatigue by blocking the action of a neurotransmitter called adenosine, which is involved in promoting sleep. Caffeine consumption at higher levels can support energy and focus, enhancing our physical and cognitive performance as it makes us feel more switched on and energised. Our latest formula contains caffeine from natural sources which are released more gradually into the body, eliminating jitters and avoiding the post-workout crash.

L-Citrulline is a precursor to nitric oxide synthesis, which stimulates circulation in the body. Greater circulation means more oxygen and nutrients being transported to functioning muscle and improved removal of toxins, fuelling a higher intensity performance.

Acids accumulating in the muscle during high-intensity exercise can inhibit metabolic processes causing a decrease in function and performance as the muscle starts to fatigue. Beta-Alanine strengthens your intramuscular buffering system, helping to reduce the build-up of these acids in the muscle, allowing you to train at a higher level of performance for longer.

Highly researched, creatine monohydrate has been shown to support muscle strength and power through increasing phosphocreatine stores in the muscle. This, in turn, helps your body to produce more ATP, which is a high energy molecule that muscles use as fuel, enhancing your strength and muscular performance.

During physical activity, the wide perception is that electrolytes hydrate, however, electrolytes actually help regulate fluid balance in the body and replace minerals lost when we sweat. They can further aid performance by helping with muscle contractions as they assist the body to move nutrients in and out of cells.